Just thought this might be of interest to some of you… what a shame, some great vintage wasted… from the UK Guardian.

Six years’ worth of Gianfranco Soldera’s Tuscan red wine, worth up to €500 a bottle, emptied on to cellar floor during break-in 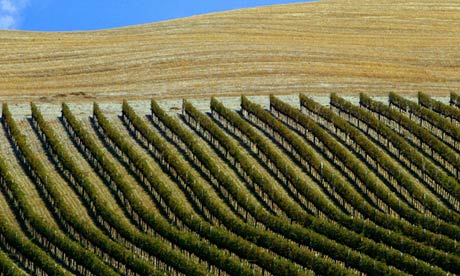 A vineyard near the Tuscan town of Montalcino in Italy. Photograph: Max Rossi/Reuters

One of Tuscany’s finest and priciest red wines is now a lot harder to find after vandals broke into the producer’s cellar and emptied 80,000 litres’ worth on to the floor.

Gianfranco Soldera, whose bottles of Brunello di Montalcino sell for up to €500 (£405), described the raid on his estate as “a true mafia-style act”. The vandals smashed through armoured glass before calmly uncorking the cellar’s barrels and letting the 2007 to 2012 vintages gush out.

Police said they had never seen a break-in like it among the producers of the highly prized, rich Brunello di Montalcino, which must contain 100% Sangiovese grapes.

“We are talking about 80,000 litres, which is an enormous amount of wine and we could smell it before we saw it,” said one officer, who declined to be named.

Soldera, who started his small vineyard from scratch in the 1970s, has built up a reputation for stunning red wines, described by one expert as containing “layers of tongue-staining blackberries, purple wildflowers and mountains of tannin”.

As Italy‘s southern mafias spread north through Italy, it is possible they have set up shop in Tuscany to extort protection money from affluent vineyards.

But Soldera’s son Mauro told the daily newspaper Corriere della Sera: “There have never been worrying episodes here, we have never received threats.”

Soldera has, however, reportedly incurred the displeasure of some of his wine-growing neighbours after he was rumoured to have blown the whistle on Brunello makers spiking their product with grapes such as Merlot, in violation of strict rules on the wine’s purity.

The use of other grapes was allegedly designed to make the wine softer on the palate for American drinkers, and the exposure of the practice in 2008 led to hundreds of bottles being seized for testing by investigators and the downgrading of wines.

Soldera has always boasted his output is undoctored and has kept his output on the low side, producing around 15,000 bottles a year from his 23 hectares of land, about a quarter of the maximum quantity he could produce.